The Death of Queen Jane

Following her sickness in the night, Jane Seymour’s confessor came to her in the morning of 24 October 1537. By 8am he was preparing to administer the sacrament of extreme unction, which involved anointing with oil and was given to those who were in grave peril of their lives. In his nursery only a short walk away in Hampton Court Palace, little Prince Edward – who was only twelve days old – was about to lose his mother.


The ceremony evidently gave Jane some comfort. Later that day, Sir John Russell was able to report that she was ‘somewhat amended, and if she ‘scape this night, the physicians be in good hope that she be past danger’. Jane’s sickness had already gone on for such a long time that those around her could not see how she could remain in that condition – she had to either improve or die.


Any hopes of her recovery were vain, however. At 8pm, twelve hours after she received extreme unction, the Duke of Norfolk sat down in his chamber at Hampton Court to write to Thomas Cromwell, stating ‘I pray you to be here tomorrow early to comfort our good master, for as for our mistress there is no likelihood of her life, the more pity, and I fear she shall not be alive at the time ye shall read this’. Norfolk was right and the queen slipped quietly away in the night.


The death of Jane Seymour had been expected for more than a week but, as she lingered, those around her continued to hope that she might recover. Henry VIII, who was close by at Hampton Court, also grieved for his wife, although he took some consolation in the survival of his son. In a letter, written to Francis of France in response to congratulations on Edward’s birth, he commented that ‘Divine Providence has mingled my joy with the bitterness of the death of her who brought me this happiness’.


In dying at the moment that Henry loved her the most, Jane retained a special place in his heart. He gave her a royal funeral at Windsor and, in time, asked to be buried with her himself. The couple lie together today. Although it is a romantic gesture, it should be pointed out that there was no other wife that Henry could have asked to be buried with. He denied that he had ever been married to Catherine of Aragon, Anne Boleyn and Anne of Cleves, while Catherine Howard lay buried as an executed traitor in the Tower. Henry’s last wife, Catherine Parr, was, of course, still alive.


The relationship of Henry VIII and Jane Seymour was no great love affair but, with hindsight, it came to take on more significance for the king as he continued to suffer matrimonial disappointments. Jane, as the mother of his son, came to be looked upon as his true queen – the woman with whom he chose to be depicted in the great painting of his family which can be seen at Hampton Court where Jane died.


Jane Seymour, the third wife of Henry VIII, was cut off at the moment of her greatest triumph, dying on 24 October 1537 before she had even reached her thirtieth birthday. 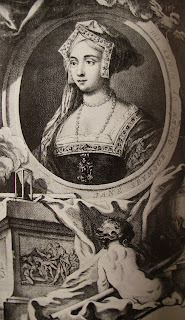 Jane Seymour from a later engraving. The cause of her death - her baby - is depicted beneath the picture.﻿
Posted by Unknown at 14:00