My article on 'The First Anne Boleyn' - Anne Hoo, the wife of Sir Geoffrey Boleyn and great-grandmother of Queen Anne Boleyn, was published today on the Anne Boleyn Files website:

Anne comes across in the sources as a vibrant and strong-willed woman and I found her one of the most interesting characters when researching my new book, Boleyn Women, which is due out on 28 July.

Below are two images that are relevant to Anne Hoo Boleyn. The first shows the remains of her memorial in Norwich Cathedral, which is no longer in its original position. Although the brasses have been lost, you can see the outline of a woman in a heraldic mantle, flanked by coats of arms. The second image is of the Boleyn chantry chapel in Norwich Cathedral. Anne's memorial was originally sited there. Her son, William, asked to be buried close to her at his own death. 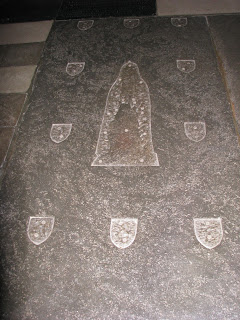 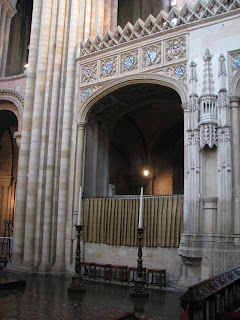