Sorry for the silence over the last couple of weeks, I've just got back from a trip to Malta, which was absolutely fantastic. I've never visited the islands before, but, with the grant of Malta to the Knights of St John by the Emperor Charles V in 1530, they played a crucial role in the defence of southern Europe in the sixteenth and seventeenth centuries. Both Malta and the smaller island of Gozo are packed with sights of historic interest, particularly in relation to their prehistoric temples. Well worth a visit!

Anyway, the main point of this post is that I have just noticed that 'The Anne Boleyn Papers' s now in stock at Amazon. I just wanted to point out again that this is the paperback version of 'Anne Boleyn In Her Own Words and the Words of Those Who Knew Her' and not a new book. If you don't already have it, it's a great read (even if I do say so myself!). I edited the book, which is a collection of the most important sources associated with Anne Boleyn, including her letters, the despatches of Eustace Chapuys, chronicles, George Wyatt's history of Anne and Henry VIII's love letters. It's a great companion book to my biography of Anne - Anne Boleyn: Henry VIII's Obsession. 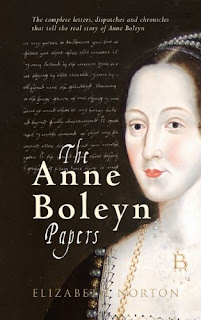