With the christening over, Jane returned to her bed to rest. She was not expected to emerge from her confinement until she had been churched, a ceremony which was held in order to purify her after giving birth. John Husee, the London agent to the Calais resident Lady Lisle spoke of Jane’s churching in a letter of 16 October, indicating that she was still not widely known to be unwell. There were similar contemporary hopes that she would quickly safeguard the succession with the births of further royal sons in the years to come. It was believed by everyone that Jane had escaped the perils of childbirth. Henry VIII was certainly pleased with the Seymours and looking towards the future, creating Jane’s eldest brother, Edward, Earl of Hertford on the day of the christening, as well as knighting her brother, Thomas.
While the king, court and country celebrated, the woman at the centre of the drama began to rapidly feel unwell. In the eighteen months since her marriage, Jane had become used to getting her own way, receiving regular deliveries of fat quails from Calais to satisfy her cravings during pregnancy, for example. Even as she began to become delirious with fever, her attendants continued to do all she asked in October 1537, with Thomas Cromwell later complaining that ‘our Mistress thorough the fault of them that were about her which suffered her to take great cold and to eat things that her fantasy in sickness called for’. It was not, however, to be the cold or unsuitable foods that killed Queen Jane.
As night fell on 16 October, Queen Jane Seymour had eight days left to live. 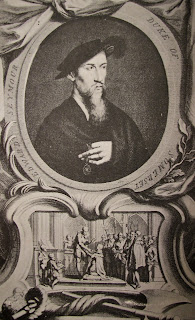