Anne of Cleves set out from Sittingbourne on 31 December 1539, heading for Rochester Castle. It was New Year’s Eve and everyone in her train was looking forward to the day’s rest promise the following day. The Duke of Suffolk and Sir Thomas Cheyne, who led the procession towards London also breathed a sign of relief as they left the cramped inn behind: Anne could be lodged in royal style for the festivities at Rochester.

On the downs outside Rochester Anne as met by the Duke of Norfolk, Lord Dacre of the South, Lord Mountjoy and a large company of knights and esquires and the barons of the exchequer, all wearing velvet coats and gold chains. She had met so many new people over the past weeks that the princess must have difficulty putting names to faces as she was conducted to Rochester Castle.

Anne had led a very cloistered early life. She was born on 22 September 1515, the second of the four children on Duke John III of Cleves and his wife Maria, Duchess of Juliers. The marriage of Anne’s parents had created the strategically important combined duchy of Juliers-Cleves, which sat on both sides of the Rhine in an area of modern Germany. Both duchies were part of the Holy Roman Empire, but they were also largely independent states. Although small in size, they were populous and wealthy. Anne, who was raised by her mother, the Catholic Duchess Maria, had a comfortable childhood, spending most of her time with her sisters, Sibylla and Amelia.

Contrary to commonly-held belief, Anne of Cleves was not a Protestant. Her mother remained staunchly Catholic until her death while her father, Duke John, although interested in the Christian Humanism of Erasmus, also retained traditional beliefs.

Anne was raised very strictly by her mother. She could read and write, but knew no language other than German. She was also given no instruction in music, although she would later show herself lively. During her time at Calais she asked her English attendants to teach her a card game that Henry liked so that they could play together. Anne was also considered to be intelligent by the English ambassadors who saw her in Cleves – something that proved to be correct. She quickly learned English with the help of a gentlewoman, Mistress Gilmyn, who was sent to Cleves by the king in order to instruct her.

By 31 December 1539 there was, of course, one person that Anne had still not met. She had no idea, as she retired to her bed at Rochester on the last day of 1539, that, the next day, she would meet her new husband, Henry VIII. 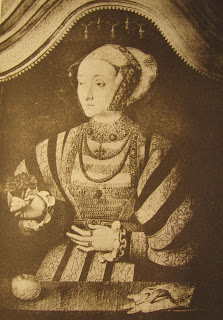 Anne of Cleves in German Dress. The painting has been x-rayed to reveal a longer nose.
Posted by Unknown at 08:39