Just who was Judith of Francia? She is little remembered today but, in the ninth century, caused scandal wherever she went. The child bride of King Ethelwulf of Wessex, her marriage caused a rebellion when word of it reached England. She then shocked contemporaries by marrying her stepson. When she was widowed for a second time, her father, Charles the Bald, King of the Franks, sent her to a nunnery. Judith had no plans to be a nun, eloping with Count Baldwin of Flanders before personally enlisting the support of the pope for her third marriage.

Through her descendant, Matilda of Flanders, Judith is the ancestress of all post-conquest kings of England (excluding Matilda's husband, William the Conqueror). Find out more about her in my guest blog over at Royal Central http://www.royalcentral.co.uk/blogs/judith-of-francia-twice-queen-of-wessex-21259#.UrQQ7vRdWAU

You can also read about her in my books, She Wolves: The Notorious Queens of England (The History Press, 2008) and England's Queens: The Biography (Amberley, 2012). 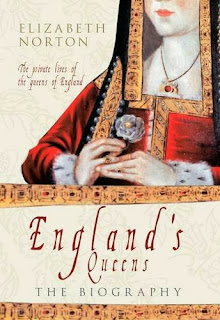