I was recently invited by eHarmony to try out a bit of Tudor matchmaking by profiling Henry VIII and his six wives. It was great fun and the results were brilliant. I think they really do reflect Henry and his wives.

The results suggested that Henry would have been hard to match with anyone if he happened to join eHarmony's books looking for love. However, of the six, Anne Boleyn was the best match. Perhaps he should have given their relationship a bit longer? Anne of Cleves was second and represents another wasted opportunity of Henry's to find lasting love. The couple got on well after the end of their marriage, perhaps the king should have tried harder to make it work.

Next came Catherine of Aragon. She and Henry had the longest relationship, but they were not always well matched in relation to their pastimes. Jane Seymour was in the bottom three, but that is perhaps not surprising. She doesn't appear to have had much in common with Henry.

Fifth was Catherine Howard, while Catherine Parr - who was too intellectual for Henry - came last.

You can read more about the results in today's Daily Mail or on eHarmony's website. What do you think? 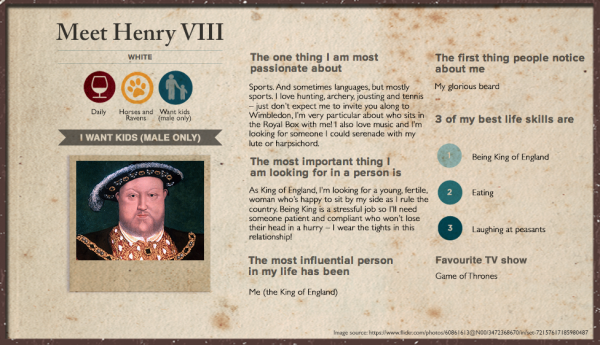