My article on Anne Boleyn's Norfolk is published in the May issue of Suffolk Norfolk Life magazine, which is currently available to read online at  http://www.suffolknorfolklife.com/

Anne was probably born at Blickling Hall in Norfolk, which had been purchased by her great-grandfather, Sir Geoffrey Boleyn. The family later moved to Hever Castle in Kent following the death of her grandfather in 1505. The Boleyns were a Norfolk family, with the earliest family members recorded as living at the manor of Salle. They were members of the yeoman class - prosperous peasants - with Anne's great-great-grandfather and great-great-great-grandfather playing a major role in building the grand parish church there.

There are still memorials to Anne's family in the churches at Salle and Blickling, as well as other places in Norfolk. It is possible, in the sites in the county, to view the family as they rose from peasant to monarch in only a few short generations. 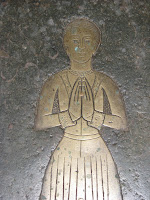