Jane Seymour rapidly deteriorated following her son’s christening, reaching a crisis point on 17 October 1537. That day, she received the last rites, with her doctors losing all hope of her life. It is not recorded whether Henry visited his dying wife. He had a horror of sickness all his life, but he remained at Hampton Court during this time, postponing a hunting trip to remain close to Jane. The queen was, in any event, delirious by this stage and probably unaware of anything that was going on around her.


Remarkably, after seeming close to death on 17 October, Jane began to show signs of recovery. Everyone at court held their breath, waiting to see if the queen would survive, but it was not to be and she quickly sickened again.


Although she was well attended, there was little that Jane’s doctors could do. She lived in an age where one doctor, who was frequented by a number of court ladies, carried around a notebook that could confidently declare that a cure for fleas, which involved anointing ‘a staff with the grease of a deer, fox, bear or badger or hedgehog: make a hole in the frame of a great hour glass in the top and bottom, put in a great stick, anoint it with turpentine the fleas will stick fast about it’, was ‘proved’. Without antibiotics, all everyone was able to do was pray and wait and see.


Just what caused Jane’s sickness? There are three main theories which I will set out over the next few days. 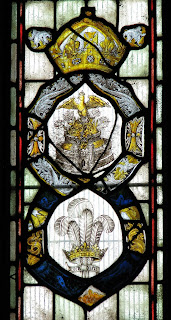 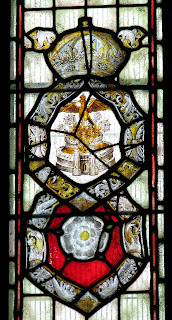 Stained glass originally from the Seymours' home of Wolf Hall - the images show Jane's phoenix badge, Tudor roses and the Prince of Wales' feather badge. They were presumably commissioned between 1537 and 1547, while Edward was Prince of Wales.
Posted by Unknown at 14:30