1 January 1540 was to be the most significant day of Anne of Cleves’ life, changing the course of her entire future. As an important feast day, it was intended that the princess should spend the day resting at Rochester before continuing her journey. She occupied herself with her attendants, as well as watching sports and other entertainments arranged for her amusement.

Henry VIII had already ordered expensive furs as a New Year’s gift for his bride but, waiting in London, he was impatient to meet her and ‘nourish love’. It was a well-established chivalric tradition for a noble bridegroom to meet his fiancé in disguise, with the expectation that the love that existed between the couple would cause the woman to immediately recognise her beloved and fall into his arms.

Such a tradition did not, in fact, have a happy history in England. Henry’s own great-uncle, the unfortunate Henry VI, had visited his bride disguised as a squire only for the woman to ignore him and keep him humbly on his knees for the entire visit. Henry VIII, however, if he knew this, chose to ignore it. On New Year’s Day, unable to contain himself any longer, he set out from Greenwich with just five attendants, dressed in a marble-coloured cloak and carrying the new queen’s New Year’s gifts.

When Henry arrived at Rochester, Anne was standing at an upstairs window, watching a bull baiting in the courtyard below. On being informed where she was, the king sent in his friend, Sir Anthony Browne, to inform her that he had brought a New Year’s gift from the monarch.

Browne had seen Anne’s portrait and heard reports of her beauty and was surprised to be directed to a room in which none of the ladies present matched the picture that he had ‘conceived in his mind’. Concerned, he asked which was the queen and, when shown, ‘he was never more dismayed in all his life’. His face fell with shock ‘to see the lady so far and unlike that was reported, and of such sort as he thought the king’s highness should not content himself with her’. He returned to Henry with a heavy heart, but did not dare to say anything.

It was now Henry’s turn to enter and, in his disguise as a messenger, he walked over to the young woman at the window. Anne, occupied with the sport in the courtyard below, studiously ignored him, something that caused consternation amongst those who recognised the king. Undaunted, Henry tried again, this time kissing and embracing the princess as she stood by the window.

Such over-familiarity on the part of a messenger shocked Anne, who had been strictly brought up well away from the men of her brother’s court. Uncertain as to what to do, she continued to studiously ignore the elderly and overweight ‘messenger’, keeping her face firmly towards the window. Finally, even Henry had to admit defeat, stalking from the room in order to change into a coat of purple velvet. This was the signal that he could be recognised and, as those about her fell to their knees, the penny dropped. Anne bowed low and the pair ‘talked together lovingly’ all evening. But the damage was already done. 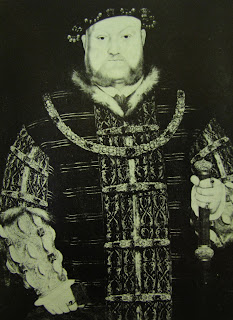 Henry VIII at around the time of his marriage to Anne. His youthful good looks were long gone.
Posted by Unknown at 00:25