Anne of Cleves woke early on 6 January 1540, allowing herself to be helped by her ladies as she prepared for the most important day of her life - her wedding day. She had brought a magnificent trousseau of clothes and jewels with her to England and, although she had already worn many in the days preceding the ceremony, she had saved the best until last.

As her thoughts turned to the ceremony, her attendants carefully dressed her in a gown of rich cloth of gold, embroidered with a design of large flowers, set with pearls. As with her other clothes, the dress was made in the German style, with a full round skirt. Her attendants also combed her long blond hair, which she wore down. Only maidens and queens wore their hair uncovered in Tudor England. She also wore a gold coronet, set with sparkling stones, as well as other jewels 'of great value and estimation'. She looked like a queen, but the thought of marriage to her filled her bridegroom with dread.

Henry VIII dressed equally richly for his fourth wedding day, wearing an outfit designed to complement his bride's and made of cloth of gold and embroidered with silver flowers. His coat, which was of crimson satin was adorned with diamonds, sparkling against the rich jewelled collar around his neck. Henry usually loved finery, but his heart was not in dressing that day, with his friend, Sir Anthony Browne, commenting that the king 'prepared himself so slackly to go to the chapel to make solemnisation', as could be seen in his 'countenance, fashion and behaviour'. Henry, who usually entered into his marriages with high hopes for the future, was despondent.

The Earl of Essex had been appointed to lead Anne to the church and she waited quietly with her ladies for his arrival. Unfortunately, he was late and Henry, resigned to the ceremony, dismissively sent Cromwell to lead the princess into the church instead. Cromwell was less than enthusiastic at finding himself associated with the king's hated bride, but did as he was bid, handing Anne over to the Earl of Essex as soon as he put in an appearance When the minister returned to the king, Henry declared 'my lord, if it were not to satisfy the world and my realm I would not do that I must do this fay for none earthly thing'. He then stalked out of the chamber, heading towards the chapel.

Henry reached the gallery outside the chapel at around 8am and paused to wait for Anne to arrive. Anne, with 'most demure countenance and sad behaviour' allowed her fiance to lead her into the church where Archbishop Cranmer performed the ceremony. As she was declared Henry's fourth wife and queen of England, the king slipped a ring onto her finger, inscribed with the words 'God send me well to keep'. Following the ceremony, the couple walked hand in hand to the king's private chapel, where they heard mass together. They then parted, in order to prepare for the rest of the day.

At around 9am Henry came again to his new queen, leading her once more to mass. The couple were then able to dine together, before Anne changed her clothes, unusually choosing 'a gown like a man's gown' made of tissue and with long furred sleeves. She recycled a jewelled cap that she had worn a few days ago - an act of thrift that was noticed by observers. With her ladies dressed in similar fashion, the queen of England went once again to the chapel for Evensong, accompanied again by the king. The couple then supped together before enjoying banquets, masques and other entertainments late into the evening.

Anne behaved like a queen throughout her wedding day, speaking pleasantly enough with her new husband through interpreters.Henry always showed himself kind and solicitous to Anne, never showing his private feelings, but she must have found the day overwhelming.

That evening the couple were ceremonially put to bed together, finding themselves alone together for the first time. For Anne, who knew only limited English and was entirely inexperienced, the experience must have been bewildering. Henry appears to have made the best of the situation, later telling Cromwell that he 'felt her belly and her breasts'. However, he liked the naked Anne even less than he liked his wife clothed in her heavy German fashions. In his cursory inspection of his new wife's body, he doubted her virginity, something which 'strake me so o the heart when I felt them that I had neither will nor courage to procede any further in other matters'. For Henry, this was all he could manage and he rolled over and went to sleep.

The following morning, Anne of Cleves woke for her first full day as queen of England, but she was Henry's wife in name only. Over the following months, the king took steps to try to consummate the marriage without success. As the political situation in England began to shift away from an alliance with Cleves, it was only a matter of time before Henry took steps to end his fourth marriage. 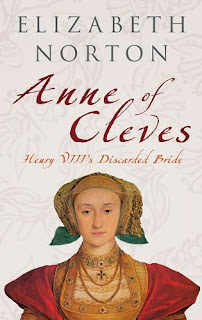 I hope you have enjoyed reading this countdown to Anne of Cleves' arrival in England. Look out for the countdown to her divorce which will begin in June 2014...
Posted by Unknown at 09:10