Anne of Cleves woke on the morning of 28 December 1539 at Dover Castle in Kent. She had been provided with the most comfortable rooms in the castle, as well as a suite of English servants to attend her, ensuring that all her needs were met. She spent the day recuperating from her journey to her new country, aware that she was not due to meet her new husband for several days to come.

Although Anne had not yet met Henry by 28 December 1539, she had been aware of his interest in her for nearly a year by that stage. With the friendship between the French king and the Emperor, England was alert to the threat of invasion, with Henry causing fortifications to be made, as well as personally viewing a muster of the men of the city of London in May 1539. As a schismatic, thanks to his break with Rome, Henry had few friends in Europe, particularly since his personal religious beliefs remained largely Catholic rather than Lutheran.

Henry’s chief minister, Thomas Cromwell, on the other hand, was sympathetic towards the religious reform movement. This fed his interest in building links with the Protestant Schmalkaldic League, which had been founded by some of the German states.

The Schmalkaldic League, which had been formed in 1531 was led by Philip, Landgrave of Hesse, and John Frederick, Duke of Saxony, who had married Anne’s sister, Sibylla. As a Protestant defensive league, it was highly politically influential and opposed to the influence of Charles V in Germany. Although Cleves, which had remained a Catholic state, was not a member of the League, the marriage between John Frederick and Sibylla ensured that it was closely allied and associated with it. Anne and her younger sister, Amelia, were the best matches that the Schmalkaldic League possessed. Cromwell knew that, if Henry married one of the sisters-in-law of John Frederick, England would be guaranteed an alliance with the Schmalkaldic League.


Certainly, John Frederick of Saxony was greatly in favour with the alliance when it was proposed, exhorting his brother-in-law, William of Cleves, to arrange the match in April 1539. Only the month before Henry had sent ambassadors to Cleves in order to enquire into Anne’s appearance and character. If they liked what they heard, they were to offer her brother friendship and request a sight of Anne.

They were to inform the Duke of Cleves that, if Henry liked the reports of Anne he ‘will be glad to honour his house and family with matrimony wither and to depart as liberally with her and with so convenient conditions as he shall have cause to be contented’. For Anne, it was a highly flattering offer. 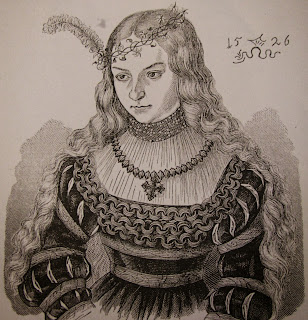 Sibylla of Cleves, Duchess of Saxony. Anne's sister provided a close link to the Schmalkaldic League
Posted by Unknown at 08:07