Empress Matilda, Lady of the English

My guest post for Royal Central on the Empress Matilda was published yesterday and can be found here: http://www.royalcentral.co.uk/blogs/empress-matilda-lady-of-the-english-20646#.Up4kB8RdWAU

Matilda's story is one of English history's great 'what-ifs'. She came tantalisingly close to being England's first ruling queen after being named as the heir of her father, Henry I.

I always think that her continuing reputation of being proud and haughty is particularly unfair. No-one would have criticised her father from keeping his vassals on their knees or expecting to be treated as a king, but Matilda, as a woman, was censured for this. You can read more about Matilda in two of my books: England's Queens: The Biography (Amberley, 2011) or She Wolves, The Notorious Queens of England (The History Press, 2008). Matilda is depicted on the cover of She Wolves. 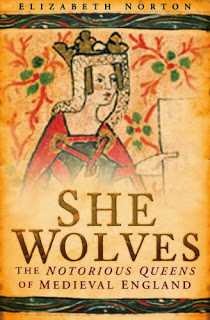