I thought that it might be nice to think about specific days in history, starting with today, 30 September.
On 30 September 1399, Henry IV was proclaimed king of England, after deposing his cousin, Richard II. Henry is often overlooked in medieval history, with the dramatic reigns of his predecessor, Richard II, and successor, Henry V, more frequently studied. He was a fascinating character however, with his usurpation being the original reason behind the Wars of the Roses (although not the spark that lit the conflict). Henry, the eldest son of Edward III’s third surviving son, leapfrogged over both Richard, who was the sole surviving child of the eldest son, as well as the descendants of the second son, the Mortimers. Anne Mortimer would later bear Richard, Duke of York, who claimed the throne from Henry IV’s grandson, the ineffectual Henry VI.

Henry IV was married twice, with his second wife, Joan of Navarre, becoming his queen following their marriage. Joan is famous as the only English queen to be punished for witchcraft. At the time of his accession on 30 September 1399, however, there was only one queen in England – the child-bride of Richard II, Isabella of Valois. I wrote about Isabella in my book, England’s Queens: The Biography (Amberley, 2010) and her story fascinates.


In June 1393 a peace treaty with France was drawn up, but Richard’s parliament refused to ratify it. Richard II, a widower, needed a new wife so that he could father an heir and Charles VI of France offered his own eldest daughter as a bride.
Isabella of Valois, the eldest child of Charles VI of France and his wife, Isabella of Bavaria, was born in 1389. Richard was attracted to marriage to Isabella primarily due to the promise of peace that it offered. It is also possible that the bride’s extreme youth appealed to him, as it would give him time for his grief for his first wife, Anne of Bohemia, to mellow. Certainly, when challenged on the wisdom of marrying a bride so far from being old enough for childbearing, Richard contended that she would become older with every day that passed.


The marriage was not universally unpopular and the scholar Philippe de Mezieres wrote an open letter to Richard setting out its benefits and pointing out that Richard could train Isabella as an English queen from an early age, suggesting that a camel had to be trained from infancy to obey man. He concluded that ‘would it not be better that the lady he chooses as helpmeet and wife, from her childhood, before reaching the age of discretion and before acquiring harmful habits of mind, should be well instructed under the prudent and wise guidance of the royal majesty’. It is unlikely that this letter dispelled many doubts about the marriage, but Richard himself remained committed to the match.
Negotiations for the marriage proceeded slowly but Richard and Charles eventually agreed a twenty-eight year truce in March 1396. According to Froissart, at the same time the English ambassadors requested that they be allowed to see Isabella, in order to report on her appearance and conduct to their master. This was granted although the French, concerned by Isabella’s extreme youth pointed out:


‘That they muste be content howe so ever they founde her, for they sayde she was but a yonge chylde of eyght yere of age, wherefore they sayd, there coulde nat be in her no great wysdome nor prudence; howbeit, she was indoctryned well ynough, and that the lords founde well whan they sawe her. The erle Marshall, beynge on his knees, sayde to her: Fayre lady, by the grace of God ye shall be our lady and quene of Englande. Than aunswered the yonge lady well advisedly, without counsayle of any other persone: Syr, quod she, and it please God and my lorde my father that I shall be quene of Englande, I shall be glad therof, for it is shewed me that I shall be than a great lady’.

The ambassadors left convinced that Isabella ‘was lykely to be a lady of hygh honoure and great goodnesse’.


Richard sailed to Calais in 1396 for a meeting with the French king. The two kings had much in common and the visit was a cordial one. Immediately after dinner, Isabella was led in accompanied by a great number of ladies and was ceremonially handed over to her new husband. She was seated in a rich litter and, together with Richard and the English nobility, travelled back towards Calais.
The couple were married in Calais and then sailed for England. Richard gave her a grand entry into London, but the people, eager to catch a glimpse of their young queen, crowded thickly around her. Isabella was unscathed but at least nine people were crushed to death on London Bridge, a tragedy that marred the occasion.


At only seven years old, it was never intended that she would be ready for either marriage or queenship and, after her coronation, she was sent with her own household to Windsor.
Due to Isabella’s youth, she played no role in the politics of Richard II’s troubled reign. I wont go into the political history here, although, in the period, Richard’s rebellious uncle, the Duke of Gloucester, was murdered on his orders. He also exiled two other opponents, Henry, Earl of Derby and the Earl of Nottingham in 1398, with Derby’s banishment for a term of six years. When Derby’s father, John of Gaunt, died in February 1399, Richard seized his lands and made Derby’s exile permanent. He then unwisely left for an expedition in Ireland.


Before he left for Ireland, Richard held a grand tournament and feast in London. The tournament was intended to highlight the splendour of Richard’s reign and Isabella was present. In spite of the expense laid out in the tournament, it was poorly attended and, according to Froissart, this was due to Richard’s treatment of the Earl of Derby. Isabella, who had received regular visits from Richard since her marriage, played the part of queen well but, soon after the tournament she returned to Windsor where he took his leave of her. Neither can have realised that this would be the last time that they would meet.
Derby sailed for England soon after Richard left, intending to claim the duchy of Lancaster. He received a rapturous reception in England and decided to make an attempt on his cousin’s crown. Richard had left his remaining uncle, the Duke of York, as regent of England in his absence and, as soon as he heard of Derby’s plans, York had Isabella conveyed to the safety of Wallingford Castle. Richard made an attempt to regain his throne and sailed home from Ireland. He was deeply unpopular however and, on 20 August 1399, was captured attempting to seek refuge in Wales and taken to the Tower of London on the orders of the triumphant Earl of Derby. He was soon compelled to abdicate and Derby took the throne as Henry IV on 30 September.


The deposition of her husband left Isabella in a difficult position and she was moved by Henry from Wallingford to Havering-at-Bower, where she could be kept under close watch. According to Froissart, her state was ‘tourned and broken’ and she was stripped of the French and English ladies of her household with whom she was familiar and furnished with an entirely new household loyal to Henry. She was able to meet with her father’s ambassadors, receiving them ‘sweetly’, but they were forbidden from giving her any news of Richard.
While Isabella was staying at Sunning near Reading, a group of Richard’s supporters obtained a man to impersonate the deposed king and spread rumours that he had escaped and was raising an army. These supporters came personally to her and informed her that Richard already had 100,000 men and that he had good hopes of victory. According John Hayward, Isabella was jubilant at this news and:


‘Shee defaced King Henries armes and plucked away his cognisance from those his servants that attended uppon her, and having in some sorte satisfied her womanish anger with this harmelesse spight, she and the lords departed together, first to Wallingforde, and from thence to Abington, stirring the people by the waye to take armour and to rise in ayde of King Richard, who was (saide they), and is, and should be their prince’.
By the time that Isabella and the lords who accompanied her had reached Chichester in Sussex they had amassed a large army. When they attempted to enter the city they were attacked by the townspeople and heavily defeated. The false Richard, who attempted to flee to Scotland following news of the defeat, was captured and executed and Isabella found herself once again a prisoner of Henry IV. Isabella’s rebellion had far greater consequences and, soon afterwards, Richard was murdered at Pontefract Castle. She was not, at first, aware that she had become a widow and she continued to look towards Richard’s restoration to the throne.


Isabella remained a prisoner during the early years of Henry’s reign as the new king had no intention of allowing such a valuable bargaining counter to leave his kingdom. When her father heard of Richard’s death he demanded that Isabella be returned to France, in spite of Henry’s attempts to marry her to his eldest son (the future Henry V, who would later marry her younger sister, Catherine of Valois).
When word reached Isabella that a new match had been proposed for her, she finally realised that her husband was dead. She plunged her household into mourning and ‘estranged her selfe from all occasions of pleasure or comforte, and was accompanied with a heavy traine composed to sorrow both in behaviour and attire’. Isabella spent her time loudly lamenting her husband’s fate and cursing Henry IV. Reputedly, she surprisingly requested an audience with Henry IV himself which was granted. She used this opportunity to attack him openly to his face, calling him ‘cruel and ambitious’ and in his ‘owne opinion mightie’, before criticising his ingratitude to Richard.


Isabella’s hostility and her family’s demands for her return finally convinced Henry IV that she would never marry his son. When she was still only twelve years old, she was returned to France with all the jewels and plate that she had brought with her to England. In 1407 she married Charles, heir to the Duke of Orleans. Like her first, Isabella’s second marriage was destined to be brief and, on 1 September 1410 she bore a daughter, before dying a few hours later. It was a sorry end for a queen who had shown so much promise. 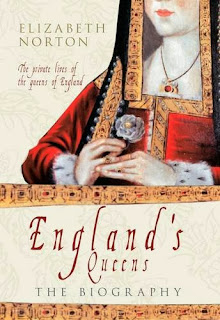 You can read more about Isabella (and all the other queens of England) in my book, 'England's Queens: The Biography)
Posted by Unknown at 23:22