Anne woke at Dartford on 3 January 1540, aware that she was finally to be officially received by the king in his capital.

To everyone’s relief, the weather on 3 January was fair, although the ground at Blackheath, where the reception was to take place, must have been damp and muddy after a week of rain. Near the foot of Shooter’s Hill at Blackheath a rich pavilion of cloth of gold had been pitched, along with several other smaller tents. In each, there was a welcome fire, with the air perfumed to allow an appropriate place for Anne to rest and change her clothes.

Anne’s official reception was intended to be a grand spectacle. In a line from the tents to the gates of the park at Greenwich the trees and bushes had been cut down in order to allow a crowd to assemble.

Anne arrived at 12pm, accompanied by one hundred horses, ridden by her countrymen, as well as the Dukes of Norfolk and Suffolk, the Archbishop of Canterbury and the other dignitaries that had met her on the route. They came slowly down the hill towards to pavilions, where Anne was met by the Earl of Rutland, who had been appointed to head her English household, as well as other high ranking officials. She was then presented to her new officers and household in a Latin oration made by her almoner, to which her brother’s ambassador made a good answer.

Once she had met her officers, Anne met the ladies who would staff her household. These were led by the king’s niece, Lady Margaret Douglas, as well as his daughter-in-law, the Duchess of Richmond and the Countesses of Rutland and Hertford. In total, fifteen women were present to greet her, with Anne finally stepping out of her chariot – the same one that she had set out in from Cleves – to give the women thanks and welcome each of them with a kiss. After her officers had each bowed low and kissed her hand she was finally allowed into the comfort of her pavilion, to warm herself.

For Anne, this was the end of her long journey. After some time, she was informed that the king had arrived and she emerged, dressed in a rich dress of cloth of gold, with a round skirt in the German fashion. On her head, she wore a cowl and round cap set with pearls. Her hair was modestly covered with black velvet and, around her neck, she wore chains decorated with costly stones. She was dressed richly, like a queen – but to the English observers her clothes appeared ungainly and old-fashioned. She mounted a horse trapped out in finery and rode to officially meet her future husband.

Henry had set out with his own train of gentlemen from Greenwich Palace as soon as he heard that Anne had reached the pavilion. Like Anne, he was mounted and, in spite of his infirmities, he looked magnificent in purple velvet. For all his private misgivings, Henry needed the alliance with Anne’s brother and he was determined to put on a show and, as the couple rode out to each other, he greeted Anne with ‘a most loving countenance’. The couple embraced, to the satisfaction of the assembled multitude, before Henry led his bride through the lane of people to the sound of drums, trumpets and cheers.

Anne charmed the crowds with her queenly manner and, as they reached the palace itself, the couple dismounted and embraced. The king then welcomed the princess warmly, before leading her into the hall. He took her personally to the queen’s apartments, before leaving her to settle in.

Henry’s reception of Anne had been more than gallant and few present can have realised his private feelings. The chronicler, Edward Hall, a visitor to the court but also an outsider, was entirely taken in by the spectacle, recording ‘O what a sight was this to see so goodly a prince and so noble a king to ride with so fair a lady of so goodly a stature and so womanly a countenance’. It was soon clear at court, however, that the king’s dislike of his bride continued. 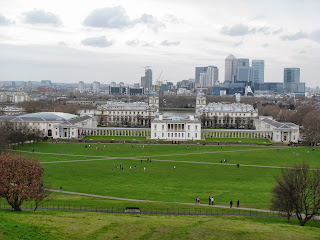 The site of Greenwich Palace. The Tudor buildings unfortunately do not survive.
Posted by Unknown at 00:00