Today marks the anniversary of a personal and dynastic tragedy. Prince Henry, the eldest son of Henry VIII and Catherine of Aragon, is one of the great what-ifs of English history. He was born on 1 January 1511 to much rejoicing. In London, bonfires were lit and wine freely distributed to the citizens.

Henry VIII was only nineteen years old when his first son was born and was overjoyed. It was proof to the world of his virility and the stability of his dynasty. On 12 February 1511 he took part in a grand tournament before the queen and court, jousting in a livery decorated with his initials and those of his wife. He also took the name 'Sir Loyal Heart' to show his gratitude and love for the queen.

The little prince, who would be named as Prince of Wales in due course, was given his own household to attend him at Richmond. Appointments included a clerk of the signet and keeper of the prince's wardrobe, who were appointed on 21 February 1511. Unfortunately, these two men enjoyed their posts for only a matter of hours and, on 22 February 1511, the baby died.

Although infant mortality was high in Tudor England, the prince's death was a shock and a great personal blow to his parents. Catherine, who had already lost a baby through miscarriage, was devastated, taking the loss 'heavily'. Henry ordered a grand funeral for his son at Westminster Abbey and, touchingly, arranged to pay a pension to Eizabeth Pointes, who had acted as his son's nurse.

Catherine of Aragon conceived several more times during her marriage, but only produced one child - a daughter - who survived infancy. Had Prince Henry lived, English history might well have been very different. There would have been no six wives, since Henry would never have discarded the mother of his beloved son. The Reformation would also have followed a very different course, if it had happened at all. Finally, there would have been no Queen Anne Boleyn or her daugher, the glorious Elizabeth I. 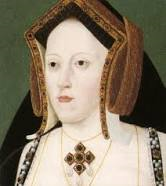