Who Was Jane Seymour?

On 22 October 1537, the English court continued to wait to see if the queen would ‘amend’. The woman at the centre of the vigil was, by that stage, oblivious to what was going on around her. Just who was the dying woman, who was the lowest-born woman ever to be queen of England?
Jane Seymour had none of the links to the nobility that her predecessor as queen, Anne Boleyn had. Anne was the granddaughter of the Duke of Norfolk and the great-granddaughter of the Earl of Ormond. Similarly, Henry’s other English wives, Catherine Howard and Catherine Parr, had family connections to the nobility (Catherine Howard was, in fact, Anne's first cousin). Jane had none of this: her recent ancestors had all been members of the gentry.
Jane Seymour was the eldest daughter of Sir John Seymour of Wolf Hall in Wiltshire and his wife, Margery Wentworth. The Seymours claimed to have first come to England with William the Conqueror, before arriving at Wolf Hall late in the fourteenth century. They were locally prominent, with family members serving as sheriffs of Wiltshire and sometimes representing the county in parliament, but they had no national standing. Jane’s father was a soldier rather than a courtier, serving in some of the campaigns of the Tudor kings. His wife, Margery, had good connections, since she was the niece of Elizabeth Tylney, Countess of Surrey, who was her mother’s half-sister. Elizabeth Tylney was the maternal grandmother of Anne Boleyn, making Jane and her predecessor second cousins once removed.
Jane’s parents married in 1494 and quickly produced a family. Their first four children were sons: John, Edward, Henry and Thomas, while their fifth was a girl, Jane, who was born in around 1508. She was followed by sisters Elizabeth, Dorothy and Margery and a brother, Anthony. Jane, like her siblings, would have been born at Wolf Hall, which unfortunately does not survive. They worshipped in Great Bedwyn parish church, which contains a number of memorials, including those to Jane’s father and eldest brother. Jane would not have remembered her eldest brother, John, who died in 1510. It was her second brother, Edward, who would dominate her life.
Edward Seymour was a courtier as well as a soldier. It is likely his career, combined with the patronage of Sir Francis Bryan, who was another grandson of Elizabeth Tylney, brought Jane to court as a lady in waiting to Catherine of Aragon. She later transferred to Anne Boleyn’s household, a move that, of course, led to her coming to Henry VIII’s notice.
Jane was no great match. When Francis Bryan attempted to arrange her marriage to William Dormer, the eldest son of a prosperous Buckinghamshire family, she was refused. It was therefore a surprise to everyone when, late the following year, in 1535, she began to attract the attention of the king. Just how she did so was as mystifying to her contemporaries as it appears to us. Jane was pale, past the first flush of youth and far from a beauty according to contemporary reports. She was, however, virtuous, and this seems to have pleased the king.
When he attempted to persuade her to become his mistress, with a letter and a purse of coins, Jane refused them, praying that the king would ‘consider that she was a gentlewoman of good and honourable parents, without reproach, and that she had no greater riches in the world than her honour, which she would not injure for a thousand deaths’. According to Eustace Chapuys, when Henry heard of this response his ‘love and desire towards the said lady was wonderfully increased, and that he had said that she had behaved most virtuously and to show her that he only loved her honourably, he did not intend henceforth to speak with her except in the presence of some of her kin’. Jane’s unavailability only made Henry want her more, as it had been with Anne Boleyn. By late April 1536 he had decided to end his marriage, in order to wed his new love: Jane Seymour.
Jane Seymour can never have imagined that she would one day be queen of England. She was, however, only able to enjoy the position for eighteen brief months. She was as good as dead on 22 October 1537. The following day, on which the crisis again came, was to be her last full day alive. 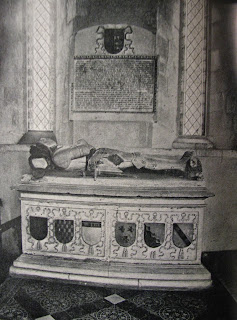 The tomb of Jane's father in Great Bedwyn church
Posted by Unknown at 06:56