By 21 October 1537, few of the men and women assembled at Hampton Court can have had hopes of Jane Seymour’s life. As she lay in the room that she had given birth in, only nine days before, everyone knew that it was only a matter of time until the end came.


The queen had been so careful of her health during her pregnancy. The summer of 1537 had seen the sweating sickness return to London, with a member of Thomas Cromwell’s household coming down with the disease in July. Henry was, of course, informed of this turn of events at once, before personally telling his pregnant wife. Jane’s reaction was such that Sir John Russell, who was present, was concerned, ‘whereupon, considering that her Grace is with child; and the case that she is in, I went again to the king and said I perceived the queen was afraid, His Majesty answered that the queen is somewhat afraid’. Henry himself felt that there was no danger in Cromwell continuing to attend court, but in order to calm Jane, he insisted that his chief minister stayed away.


There was little practical that Jane could actually do to avoid the plague, apart from shutting herself away. That same month, she insisted that Lady Rutland be quarantined at Enfield when a member of her household went down with the sickness, with the Calais-based Lady Lisle, who ensured that she stayed on top of all the court gossip, being informed that she would ‘not believe how fearful the queen’s grace is of the sickness’. Jane had a particular reason to fear the sweating sickness, since the outbreak of the disease in 1528 is likely to have caused the deaths of her two youngest siblings, Margery and Anthony.


In the summer of 1537 Jane knew well that any failure to bear the king his expected son would be blamed squarely on her and this accounts for her fear to some extent. However, it is also clear that she wanted to live and be a queen. She spent much of the summer of 1537 closeted at Windsor with a greatly reduced household. It was also agreed that, while she awaited the birth of her child at Hampton Court in September, Henry would stay nearby at Esher in order to reduce the numbers of people near the queen.


Jane’s time as queen had been filled with anxiety, in part at least due to the constant reminders of what had happened to Anne Boleyn. She had taken a worryingly long time to fall pregnant after her marriage and was considered at court in late 1536 to be ‘a woman who is not very secure’. With the birth of her son, she was unassailably queen of England on 21 October 1537. Unfortunately, she only had three days left to enjoy it. 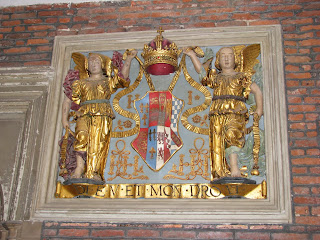 Jane's initials entwined with Henry's outside the chapel at Hampton Court. Jane knew that, should she fall, her initials could be removed as easily as Anne Boleyn's had been before her.﻿
Posted by Unknown at 08:08