Yesterday the countdown to Jane Seymour's death came to an end. Her death on 24 October 1537 is almost the end of the story. All that remained was to bury her like the queen she was.

The day after Jane's death, Henry VIII left Hampton Court for Westminster, unwilling to remain near his wife's body. It is a mark of his sincerity that he shut himself away for a time, although the search for a new bride had begun before the end of the year. England now had a Prince of Wales, but it needed a Duke of York to secure the succession further.

The Duke of Norfolk was directed by the king to arrange Jane's funeral. She was the last woman to die as queen in more than thirty years and the peer therefore looked back to the burial of Henry's mother, Elizabeth of York, who had also died in childbirth. When it was noted that Elizabeth's funeral had been attended by seven marquises and earls, sixteen barons, sixty knights and forty squires, it was ruled that Jane should have the same. It was the least that Henry could do for the mother of his longed-for son.

Soon after her death, Jane was embalmed and carried to the presence chamber at Hampton Court, where she lay in state, dressed in a gold and jewelled robe. Once in the presence chamber, Jane's ladies took off their rich clothes and, instead, wore 'mourning habit and white kerchers hanging over their heads and shoulders'. Mass was heard and the women stayed with Jane day and night, with tapers burning around her. On All Saint's Day, Jane was carried through the black hung galleries of the palace and taken to the chapel.

By convention, the king was absent from the funeral and it was his eldest daughter, Mary, who had loved her stepmother, who took the role of chief mourner. She was, however, too grief-stricken to attend the ceremonies on 1 November, with her place instead taken by her friend, the Marchioness of Exeter. The following day, further religious services were held, this time with Mary in attendance. During this period the princess, who had received some of Jane's jewels after her death, made offerings for her stepmother, as well as arranging pensions for members of the deceased queen's household.

Early in the morning of 12 November 1537 Jane was finally moved from the chapel at Hampton Court to a chariot drawn by six horses. With her banners carried behind her and a great procession, the corpse made its stately way to Windsor, where it was intended that she buried. She was finally interred on the morning of 13 November, nearly three weeks after her death.

Today, Jane's grave in the chapel at Windsor Castle is marked by a simple slab, which also bears inscriptions to her husband and later royals who share the grave. She was queen for less than eighteen months, but cemented herself in the Tudor dynasty by bearing her husband a son. She was the only one of Henry VIII's six wives to die a queen.

This is the end of Jane Seymour's story. I've enjoyed following the last few weeks of her life in these posts and hope that you've enjoyed reading them. Look out for other countdowns in recent months, I think it is an effective way of looking at a moment in history. If there is anything that you would particularly like to cover then please do comment below, it's always great to hear from anyone who has enjoyed these posts! 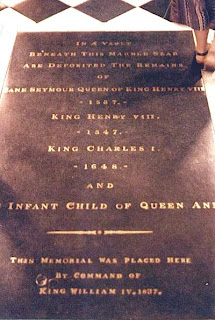