If Lady Rochford can largely be discounted as the main source of the evidence against Anne, then where did it come from?

Little evidence survives surrounding the charges, although Sir John Spelman, a judge who sat on the bench during Anne's trial, noted that she had originally been accused by Lady Wingfield. Lady Wingfield was an old friend of Anne's, who had died in either 1533 or 1534, apparently leaving a deathbed statement in which she accused the queen of being morally lax. This document does not survive but, given the date of Lady Wingfield's death, perhaps refers to an affair before Anne's marriage.

While she was still unmarried, Anne had written to Lady Wingfield in veyr subservient terms, suggesting that the pair were well known to each other. It is impossible to know what Lady Wingfield said, but it is possible that Anne's relationship with Henry Percy, whom she hoped once to marry, was raised, since his name was mentioned in the enquiries in 1536. A lack of chastity before marriage could be a ground for divorce, but it wasn't treason.

A more damning accusation was made by Anne's friend, the Countess of Worcester, and it is this which seems to have caused the enquiries into Anne's conduct to begin. One gentleman, present at court in May 1536, recorded 'the first accuserrs, the Lady Worcester, and Nan Cobham, with one maid more. But Lady Worcester was the first ground'.

Nan Cobham has never been identified, but Lady Worcester was a member of Anne's household. Following Anne's death, she wrote to Cromwell to say that Anne had lent her £100 - a vast sum - and one in which she was 'very loath it should come to my lord my husband's knowledge thereof, I am in doubt how he will take it'. Lady Worcester had a lover in early 1536 and her brother, Sir Anthony Browne, berated her for her immoral conduct. In her anger, she blurted out that she was not the worst and that her brother should look to the conduct of the queen herself.

This was enough for investigations to begin, with Cromwell's agents visiting Anne's household to 'tempt her porter and serving men with bribes, there is nothing which they do not promise the ladies of her bedchamber. They affirm that the king hated the queen, because she hath not presented him with an heir to the realm, nor was there any prospect of her doing so'.

With the evidence gathered, it was time for the men with whom Anne was accused to go on trial for their lives. 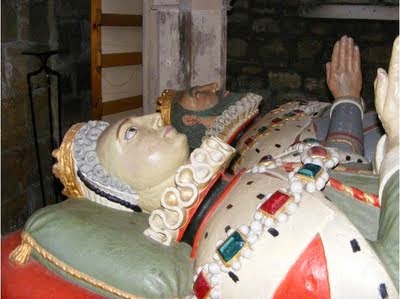 The Countess of Worcester, from her tomb at Chepstow
Posted by Unknown at 06:48