Anne Boleyn's arrest shocked her contemporaries. Although the charges appear trumped up and hard to believe to modern eyes, there does seem to have been a grain of truth in what was claimed. Certainly, Anne's comments on Francis Weston were enough to turn suspicion on him, while it was evidently not considered that there was enough evidence to proceed against Sir Thomas Wyatt and Sir Richard Page. It is also clear that investigations were carried out in order to try to prove Anne;s guilt.

Anne and her supposed lovers were accused of a number of charges. According to one, which was read at Anne's trial on 15 May, the queen 'despising her marriage, and entertaining malice against the King, and following daily her frail and carnal lust, did falsely and traitorously procure by base conversations and kisses, touchings, gifts, and other infamous incitations, divers of the King's daily and familiar servants to be her adulterers and concubines, so that several of the King's servants yielded to her vile provocations'.

Anne was evidently considered to be the instigator, procuring Henry Norris 'by sweet words, kisses, touches, and otherwise', causing him to 'violate her' on 12 October 1533 at Westminster, amongst other occasions.

She apparently went even further with her own brother, inciting him to violate her 'alluring him with her tongue in the said George's mouth and the said George's tongue in hers, and also with kisses, presents and jewels; whereby he, despising the commands of God, and all human laws...violated and carnally knew the said Queen, his wn sister', with this 'violation' apparently also taking place on numerous occasions.

Anne was also claimed to have 'procured' Brereton, Weston and Smeaton at various palaces throughout her marriage, with the queen also conspiring with them towards 'the death and destruction of the King' and promising to marry one of them. She was accused of stating that 'she would never love the King in her heart'.

The list of charges against Anne were intended to be shocking, but was there any truth in them? They are very specific, although not all of the dates and locations could be correct. No actual evidence was offered to support these specific claims although, as Anne herself recognised, when such offences were alleged she could 'say but nay'.

Tudor queens were never alone, with Henry VIII's fifth wife, Catherine Howard, forced to involve her kinswoman, Lady Rochford, when she wanted to meet her lover in secret: it was simply not possible for her to discharge all her servants for a night. The idea, then, that Anne would have had the privacy to indulge in illicit sexual affairs is highly doubtful. However, what is clear is that Anne's own words and the conduct of her household lent themselves towards being misconstrued. There were rumours enough for Anne's enemies to construct a case against her, regardless of how far fetched the actual charges were.

In fact, Anne found that her most dangerous accusers were all women whom she had counted as friends. 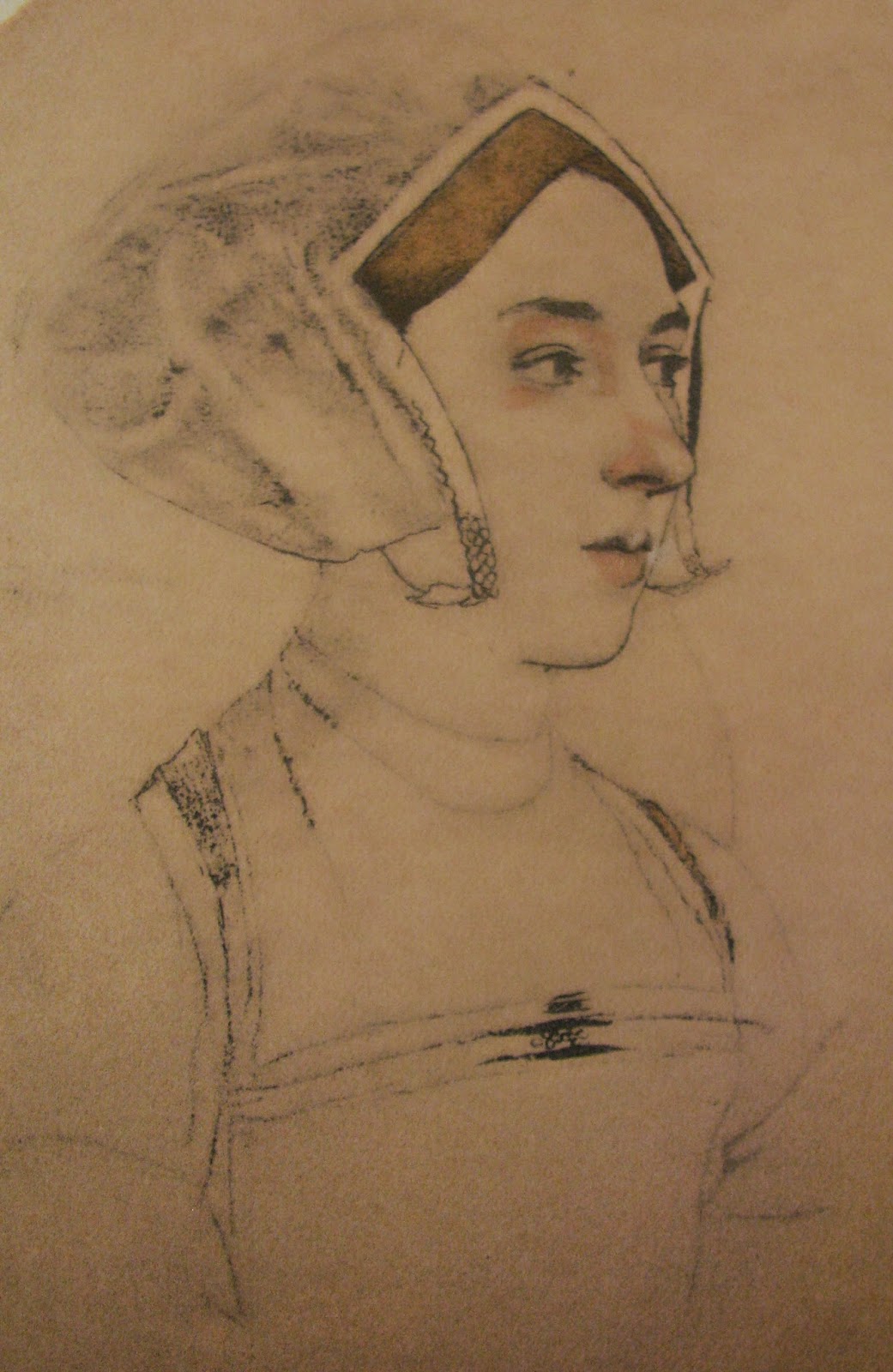 Drawing commonly identified as Anne Boleyn
Posted by Unknown at 06:12